When Souths flyer Alex Johnston ran in for his third try against the hapless Tigers right side defence in their recent Round 12 clash, he became the Rabbitohs’ highest ever try scorer.

He joined the top guns at the other 15 NRL clubs, and went past Frank Burge on the Australian rugby league’s all-time try-scoring list to slot in alongside Bob Fulton in equal 16th with 147 tries.

If Johnston can maintain his form and fitness for the rest of the season he’s a real chance to finish the year in the top 10 of all-time, and then set sail for Ken Irvine’s 212 try record which has stood for the last 50 years.

It’s crazy to think now that it was just two years ago that Wayne Bennett and the boys and girls in the back office at Redfern were planning to squeeze Johnston out of the club for salary cap reasons, despite the fact that he was just 25 years old at the time and had already scored over 130 tries in the cardinal red and myrtle green.

Geez, how tight could finances have been? Somehow they’d reached the decision that either scoring tries wasn’t such an important KPI for the club, or that there was someone else who’d be better at scoring them than Johnston.

Fortunately for Souths they didn’t proceed with that dumb little plan, Alex Johnston went on to be the NRL’s top try scorer for both the 2020 and 2021 seasons, and he is now signed by Souths until the end of 2025. Local junior made good, and with a lot more highlights to come.

I just wonder if the calculator cowboy who came up with that thought bubble had anything to do with the decision to let Adam Reynolds head to Brisbane?

So how does Alex Johnston rate compare to the top guns from each of the other NRL clubs? How far can these stars take it, and who is breathing down their necks to claim their title?

The following table shows the comparative position of each club’s top try scorer, their ranking based on total number of tries scored, their try scoring strike rate (games played per try scored), and their position on the all-time try scoring list.

Let’s take a look at each player.

Slater is top of the pile for Melbourne with 190 tries with Matt Geyer a distant second with 113. Slater looks to be a safe bet to hold on to his top dog status at the Storm for some time to come, with only Ryan Papenhuyzen, 46 tries from 66 games and Xavier Coates, 11 from 11, the only current Storm players who might pose a threat, but they’ve got a long way to go. Slater is number 2 on the all-time list but is now well within reach of Alex Johnston.

ET leads the way at the Sharks on 165 tries with Wade Graham (38 tries), Sione Katoa (37 tries) and Ronaldo Mulitalo (34 tries) the only current players with more than 30 tries on the board. ET’s club record won’t be run down anytime soon, and Alex Johnston only needs another 18 tries to pass him on the all-time try scoring list.

Even some Manly fans may be surprised to learn that Stewart is the top gun at Manly with 163 tries, ahead of Steve Menzies second with 151 tries, but Menzies did have that wasted three seasons with the Northern Eagles with whom he scored 29 tries. If it’s any consolation to Beaver, he does sit above Stewart on the all-time list in third place. Of the current crop of players, Tom Trbojevic (78 from 121 games) is the closest to Stewart, but perhaps Jason Saab (27 from 35) will pose the biggest threat if he can string some injury-free seasons together.

El Masri is probably better remembered for his goal-kicking feats but he was also a very good finisher, and rarely missed an opportunity to run a try in. It’s hard to see anyone taking his top gun title of 159 tries at the Dogs until they really turn things around at the club. El Masri’s 4th spot on the all-time list could fall to Alex Johnston by year end.

Vatuvei is way out in front on the Warriors leader board on 152 tries and is the only player to notch up over 100 tries for the club. Stacey Jones sits in second place on 82 tries. It’s almost inconceivable that any current Warriors player will get close to Manu’s mark.

The man himself. Now the top gun at South Sydney with 147 four pointers and with the best strike rate on the list at one try every 1.21 games, which compares very favourably to the all-time record holder Ken Irvine, who had a strike rate of 1.11. Interestingly, Johnston still has two Souths greats in Nathan Merritt (154 tries) and Harold Horder (152 tries) ahead of him in the all-time stakes, as they added to their tally while playing for other clubs. It’s hard to imagine that Johnston’s South Sydney record will come under threat anytime soon. 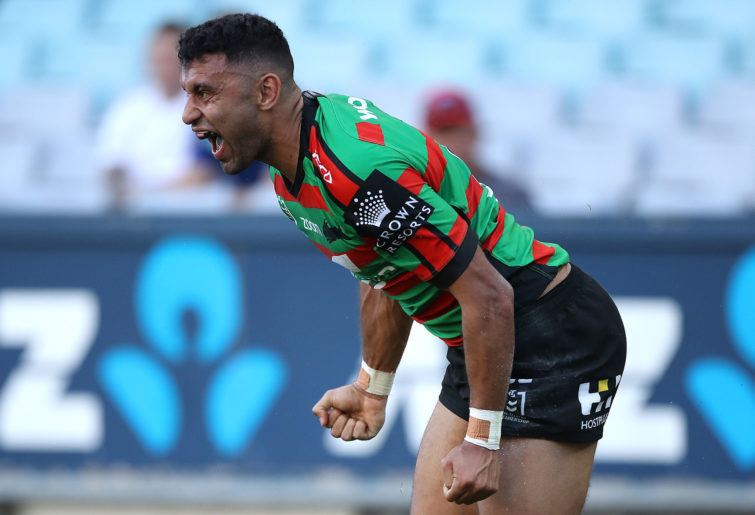 Renouf hasn’t run out for the Broncos since 1999 but his club record of 142 tries still remains intact. Darren Lockyer, Michael Hancock and Wendell Sailor all got closest and into the 120’s try wise. 27 year old winger Corey Oates is closest of the current players to Renouf with 108 tries at a strike rate of 1.66 games per try, and he could just be the man to overtake the Pearl if he plays another few seasons and doesn’t try to become a backrower again.

Mini still sits on the top perch at the Roosters with 139 tries but has recently rejuvenated NSW origin winger Daniel Tupou now breathing down his neck with 125 tries at a strike rate of 1.70. Tupou should become the top Rooster some time next year if he can stay fit.

The Canberra stalwart holds both the try scoring record with 133 tries, and the record for most points scored for the Raiders, but his recent spate of injuries will probably stop him playing most games for the club. On the try scoring front, the closest of the current crop of players to Croker is Jordan Rapana with 84 tries, but at nearly 33 years of age, he’s no threat to Croker. The next closest of the current contenders are the 29 year old Jack Wighton with 67 tries and Nick Cotric with 48 tries. Still just 23 years of age, perhaps Cotric is some chance of catching Croker, but I doubt it. 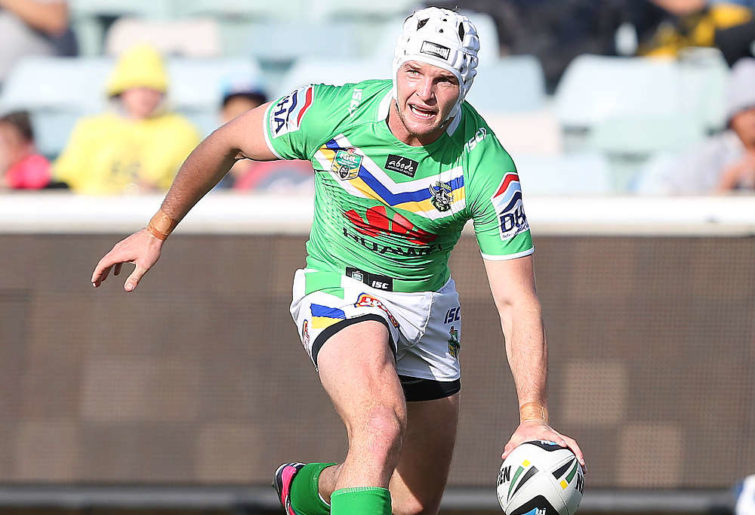 The only Cowboys with more than 100 tries in the bank are the mercurial Matt Bowen on 130, and stalwart winger Kyle Feldt with 111 four pointers. 30 year old Feldt has an excellent strike rate of 1.48 games per try, so the record could be his for the taking if he can maintain form and fitness for another couple of years.

Cooper hung in there for 14 seasons to establish his try scoring record of 124 tries and was probably lucky that Brett Morris jumped ship to join the Bulldogs when he was at the 114 try mark for the Dragons. The only possible threat to Cooper’s record from the current Dragons line up is Mikaele Ravalawa who has 41 tries from his 55 matches, for an impressive strike rate of 1.34.

Utility back Luke Burt is somewhat a surprise leader on 124 tries at the Eels, shading noted try scorers like Jarryd Hayne, Brett Kenny and Steve Ella, but he did put in 14 years with the club. Clint Gutherson (59 tries) and Maika Sivo (54 tries) are the closest of the current Eels, with perhaps Sivo the bigger threat with his strike rate of just 1.24 games per try.

Wesser is the top Panther with 113 tries and could hold that title for some time to come. Nathan Cleary on 47 tries with a strike rate of 2.74 is his closest rival from the current playing group, so it will probably take another young player to break from the pack if Wesser’s record is to be run down.

Uate scored his 110 tries for the Knights at an excellent strike rate of 1.46, and remains the only Knights player to have notched up over 100 tries. 24 year old star Kalyn Ponga with 38 tries is the only current contender with a chance of catching him.

One of only three of the top guns still playing, he 28 year old Nofoaluma has an ideal opportunity to extend his try scoring record well past his current tally of 92. None of the current crop of Tigers look likely to catch him.

Anthony Don – The Titans haven’t been around as long as the other 15 clubs so it’s hardly surprising that their now retired winger Anthony Don is the top gun with the lowest try scoring tally at 82 tries. David Fifita, currently with 20 tries from 31 games, just might be the dark horse to run the Don down.

• All of the 16 top guns are now retired with the exception of Alex Johnston, Jarrod Croker and David Nofoaluma.
• All are outside backs, predominantly fullbacks and wingers, with a few centres in Matt Cooper, Steve Renouf, Jarrod Croker and Andrew Ettingshausen.
• Only 6 of the 16 are also in the top 20 on the all-time try scorer list.