The three Origin players who suffered head knocks in the early stages of Wednesday night’s brutal decider will sit out Round 18 under the NRL’s concussion protocols.

Blues forward Cameron Murray and Queensland duo Lindsay Collins and Selwyn Cobbo are automatically out of club duty while there is doubt over Maroons hooker Harry Grant‘s ability to back up for Melbourne after he suffered a corked glute muscle.

Cobbo had not been selected for the Broncos but Collins will need to be replaced from the Roosters’ front row for their Gosford game against the Dragons and Murray was due to lead the Rabbitohs against Canterbury.

There are bound to be several other players who are unable to play for their clubs after the ferocious encounter.

Penrith coach Ivan Cleary had already opted to give his seven NSW reps a breather this Sunday with Nathan Cleary, Api Koroisau, Stephen Crichton, Isaah Yeo, Liam Martin, Brian To’o and Jarome Luai all not selected for the CommBank Stadium clash with the last-placed Wests Tigers.

Tino Fa’asuamaleaui, Dane Gagai and Matt Burton have escaped bans over their part in the Origin brawl early in the second half of Queensland’s 22-12 defeat.

Grant’s possible absence could compound the hooking problem at the Storm after Brandon Smith was banned for three matches on a contrary conduct charge at the NRL judiciary.

The match review committee referred his case directly to the judiciary panel after Smith called referee Adam Gee a cheat during last Thursday’s 28-6 thrashing at the hands of Cronulla at PointsBet Stadium.

Smith accepted guilt and his counsel asked for a two-week ban, while the NRL argued for four weeks. Eventually, the panel split it down the middle. 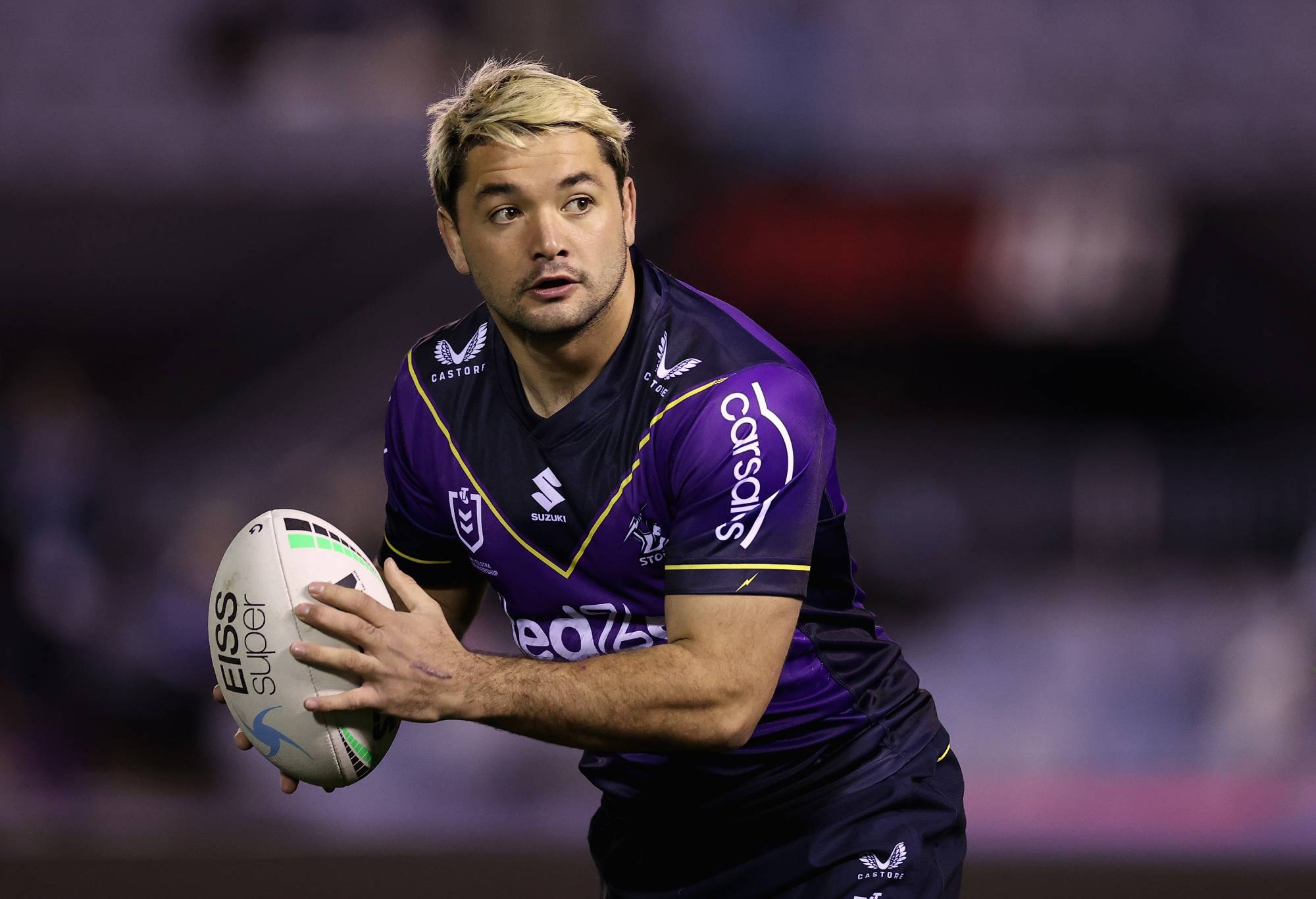 Melbourne also have fitness clouds over Cameron Munster (COVID-19) and second-rower Kenny Bromwich (ankle) but both have been selected. Veteran forward Felise Kaufusi is available after flying home from the US where he visited his sick father.

Canterbury centre Aaron Schoupp has been ruled out of Sunday’s clash with Souths after testing positive to COVID-19 while Bunnies rookie Lachlan Ilias has been cleared after copping a nasty head knock last week.

Wests Tigers pulled a surprise by naming Jackson Hastings at lock with Luke Brooks returning to halfback and Adam Doueihi moving back to five-eighth from centre.

Dragons veteran Tariq Sims will be suspended this weekend for the high shot on Rhys Kennedy which earned him a second trip to the sin bin in Sunday’s loss to Brisbane.

Sharks forward Briton Nikora will be missing this week after copping a one-game ban for his tackle on Bromwich last Thursday.

Knights prop David Klemmer accepted a $1000 fine after he was sent off late in the loss to Souths for using a forearm in a tackle.

Cowboys: Prop Jordan McLean will be out of action for at least a few weeks after suffering a hamstring tear at Blues training last week, robbing him of an Origin debut.

Tom Dearden and Tom Gilbert face the tough ask of backing up from Origin less than 48 hours after playing the decider. Origin squad members Hamiso Tabuai-Fidow, Reece Robson and Chad Townsend have also been named. Valentine Holmes and Jeremiah Nanai have been rested though. Murray Taulagi is sidelined due to his bout of COVID with Brendan Elliot on his wing.

Sharks: Nicho Hynes and Toby Rudolf are back from their isolation period due to COVID. That means Andrew Fifita will start on the bench while Blues Origin squad member Siosifa Talakai is on the reserves list. Briton Nikora has been suspended a game for a hi-drop tackle with Teig Wilton to start in the second row.

Eels: Brad Arthur has only prop Junior Paulo to worry about in Origin 3. Jake Arthur has been named on the bench and is set to play his first game since Round 8. Ryan Matterson (ribs) is not due back until next week.

Warriors: Broncos-bound fullback Reece Walsh sat out the homecoming win over the Tigers due to COVID-19. He returns this week with Chanel Harris-Tavita going back to five-eighth.

Roosters: James Tedesco, Angus Crichton, Daniel Tupou and Lindsay Collins are in action on Wednesday night. Joey Manu will once again have the reponsibilities at No.6 with Luke Keary still sidelined from last month’s head knock.

Dragons: Fijian winger Mikaele Ravalawa will be missing for a month after tearing a hamstring while trying to stop a try against Brisbane on Sunday. Ben Hunt has been named but could be very sore after the extra responsibility of having no Cameron Munster in Origin on Wednesday night. Jack de Belin starts in place of the suspended Tariq Sims.

Sea Eagles : Front-rower Josh Aloiai missed the last-start win over Melbourne due to a concussion but has been named 18th man. Coach Des Hasler has been in COVID-19 isolation but is due to return by game day.

Knights: Adam O’Brien has Kalyn Ponga, Dane Gagai and Blues debutant Jacob Saifiti to check on after Origin 3. Bradman Best is on the sidelines after suffering a thumb injury.

Titans: The good news for the Titans is they moved off the bottom of the ladder with the two points from the bye last round. The bad news is they’re still 3-13 and five wins adrift of eighth. Aaron Booth will make his club debut at hooker and there’s also a new five-eigth in Tanah Boyd. David Fifita’s second cousin Sosefo (JoJo) will make his NRL debut on the wing.

Broncos: Payne Haas (shoulder) is likely to need at least another week before the star prop can return while Brisbane. The Broncos have decided to rest Origin players Selwyn Cobbo and Kurt Capewell.

Tigers: Veteran prop James Tamou sat out last weekend’s loss to Parramatta with a calf injury. He’s been named on the bench against the Panthers. Adam Doueihi will move to the five-eighth role with Luke Brooks switched to halfback and Jackson Hastings packing down at lock.

Panthers: With seven players lining up for the Blues, coach Ivan Cleary is looking at resting a few of his stars now the representative schedule is over. Nathan Cleary, Api Koroisau, Stephen Crichton, Isaah Yeo, Liam Martin, Brian To’o and Jarome Luai will all be able to put their feet up on Sunday afternoon.

Storm: Brandon Smith was not selected for Sunday’s game and was rubbed out for three matches at his judiciary hearing. Cameron Munster should be good to go after COVID-19 cost him a spot for the Maroons on Wednesday night. Felise Kaufusi is back from personal leave in the second row.

Raiders: Only one win out of the eight after their narrow loss to the Dragons before the bye, they are 11th on percentages and need to upset the Storm in Melbourne to keep pace. Ricky Stuart has kept an almost identical team to the won that lost to the Dragons in Round 16.

Bulldogs: Tevita Pangai jnr injured his ankle in the last-start defeat to Cronulla before the bye while debutant forward Declan Casey suffered a heavy concussion. He’s been named in the reserves while the Bulldogs will be hoping three days is enough time for Matt Burton to be ‘fresh’ from Origin in the five-eighth role. Aaron Schoupp (COVID) was ruled out on Wednesday.

Rabbitohs: Alex Johnston and Mark Nicholls return. Halfback Lachlan Ilias has also been named despite suffering. a head knock but he’ll be monitored in the coming days.

Advantages of Being Tall in Racquet Sports