Region 10 claimed all three major 4A baseball awards that were released on Wednesday morning by Deseret News.

Anderson was named Utah’s Gatorade Player of the Year on June 3rd and was also named Region 10 MVP.

Evans hit .476 with seven home runs and 38 RBIs as a sophomore for the state champions.

Sampson was lights-out in the 4A title-clinching game for Crimson Cliffs.

The left hander went six innings of two-hit baseball, shutting down a red-hot Warrior offense in a 6-0 win for the Mustangs.

Sampson struck out six over five innings while allowing just one run in a 16-2 win against Pine View earlier in the state tournament.

Also among the state champions on the First Team was junior shortstop Petey Soto.

Soto hit .300 for Crimson Cliffs and scored 37, acting as a catalyst at the top of the order.

Mendenhall hit .436 and had 23 RBIs and 43 runs scored moving up and down the Warrior lineup.

Johnson hit .417 and knocked in 28 while spending most of his time at third base and on the mound.

On the bump, Johnson had five wins in ten appearances.

His battery-mate in Iverson hit .333 and belted four home runs and had 19 RBIs for the Panthers.

Payton Gubler and Cole DeCastro were the two Desert Hills Thunder representatives on the First Team.

Gubler recorded 99 strikeouts in 48.1 IP with a 2.16 ERA. Gubler only walked 20 on the mound. Gubler also hit seven home runs at the plate.

Parowan’s Shaydon Benson was named Deseret News’ 2A Player of the Year.

The Utah Tech commit was a two-way force for the Rams, batting .530 with seven home runs and 33 RBIs at the plate.

Benson allowed just 13 earned runs on his way to a 2.24 ERA and held opponents to a .119 batting average.

In his final four outings, Benson struck out a combined 50 batters in 20.1 innings.

Benson pitched 4.2 innings and recorded all 14 outs by strikeout on May 7th against San Juan in a 9-7 win for the Rams.

Benson threw five innings of no-hit baseball against Enterprise in the 2A State Tournament, striking out 12 in an 11-0 win.

Sean Ellertson is a sports reporter for the St. George Spectrum & Daily News. To continue to support his work, please subscribe to The Spectrum. Follow Sean on Twitter @SeanEllertson. 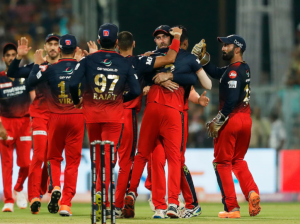